Go to content
Bathurst Main Colliery.
Bathurst Main. SK 46/56 47306960
‘Batty's Main’.
Near to the area now known as Carr Vale a small colliery was sunk during the late nineteenth century and affectionately known by locals as 'Batties Main', corruption of the name Bathurst which was situated to the south of the later Lancashire, Derbyshire and East Coast Railway tunnel between Carr Vale and Scarcliffe, on Darwood Lane, Spittal Green, overlooking the village. Bathurst Main colliery mined coal on land belonging to Earl Bathurst or Lord Byron of Cirencester Park Gloucestershire who purchased the manors of Palterton and Scarcliffe in the middle of the eighteenth century from the Aspley family. It was on this original site that the clays were mined from a small footrel. The colliery worked from two small seams of coal, the Wales and Highmain seams. Sometimes called the Upper Silkstone or Silkstone seams.
The colliery worked small scale here until around 1891 (According to. Geology of the Country Around Chesterfield, Matlock and Mansfield. Smith, Rhys and Eden. H.M.S.O.) When work from the early adits and the later shaft ceased officially. Unofficially however the colliery allegedly 'worked' during the miner’s strikes of the twentieth century culminating in production during the 1972 strike when coal was wound to the surface using an overturned motorcycle as a winding engine. You can appreciate the small scale of the coal mining operations when you realise that the Highmain seam is only twenty three inches thick and the Wales seam between eleven and sixteen inches thick as they run from Carr Vale to Palterton. It was Earl Bathurst along with other local landowners who sought to exploit mineral reserves on their estates but I think they may have been a little disappointed with the coal reserves here.
Near to the colliery site a borehole was drilled one hundred and forty feet into the measures below the Highmain coal seam and a water treatment plant was set up for Bolsover Council as the borehole yielded between four and eight thousand gallons of water per hour. The water was then treated with lime and pumped up to Bolsover to supply the area. It was possibly still in use during the 1960's.
According to later reports the colliery was in use as late as 1896 when the brickworks were to be sold at auction as a going concern. This raises the question were there two collieries in the vicinity? Were the two adits a later colliery and the single shaft an earlier colliery? The single shaft method of mining was outlawed in 1862 after the Hartley colliery disaster. Or could it be that both adits and the shaft formed one mine?
A lease was taken out for the mine in 1885 (31/12/1885) from Lord Byron for forty years at a cost of £100 this included the Clowne seam which lays at a depth of 497 feet from the surface and is around three feet nine inches thick and another seam which is eleven yards above it. (This second seam is only seven inches thick as the Swinton Pottery Coal). Not really a viable proposition one would think. The lease provided for 257 acres of coal. The mined coal was transported from the colliery to the brick works by fifty chains of haulage rope powered by a 14 horsepower horizontal haulage engine.
Information from Abandonment plans of 1893.
Plan shown below.
Compiled by A.H. Stokes, H.M. Inspector of Mines. Derby. 28th January 1893.
Parish: Scarcliffe.
County: Derbyshire.
Mineral: Silkstone Coal & Fireclay.
Date of Abandonment: 15th December 1891.
Cause of Abandonment: Thickness of seam.
Owner: Lord Bathurst.
Leased to: William Arkwright, Sutton Scarsdale.
Section: Coal: 23 inches.
Section: Clay: 30 inches. 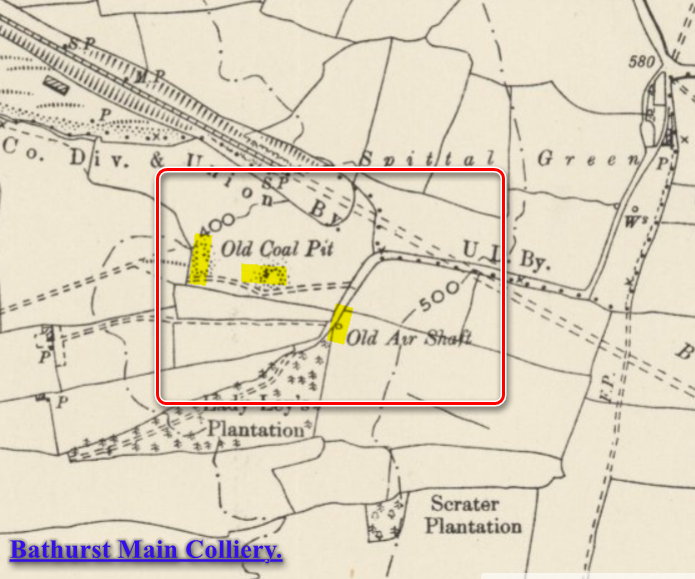 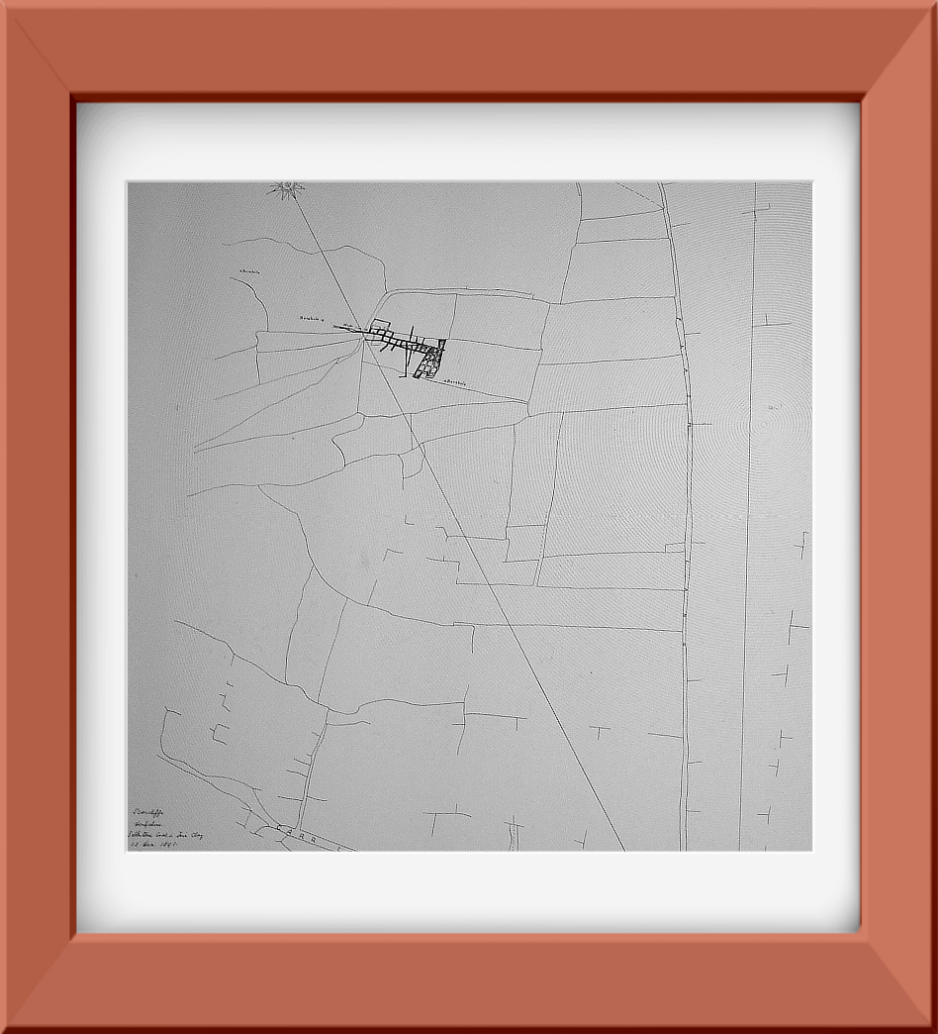 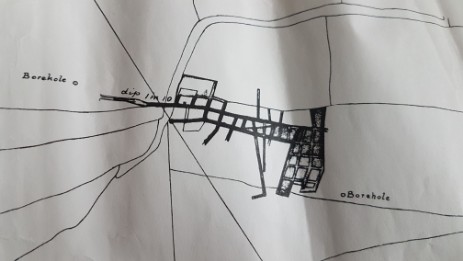 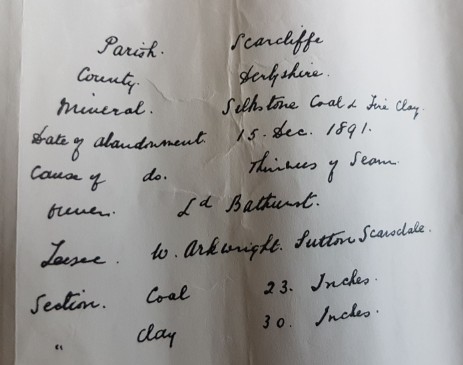 Palterton Colliery.
Palterton Old Colliery SK 46/56 47056850
Two small seams of coal run from Palterton to Carr Vale the Wales and Highmain and it may have been exploratory sinking to exploit these seams that opened up the colliery. The Palterton miners are referred to in 1911 but any other documentation is unavailable but note the colliery type housing built by the Staveley or Sheepbridge Company in Palterton village. Plans show two shafts and some other surface workings nearby. The presence of the two shafts should indicate that the colliery is later than 1850 or that it is two separate workings from earlier, which is much more likely. However John Farey writing in his 1811 book refers to 'a colliery at Palterton which is just west of the houses or 1 1/4mile ssw of Bolsover,' but is logged as 'formerly worked' here, meaning that by 1811 the colliery or workings are no longer in use.
Farey also writes in 1811 on p167 of ‘General View of the Agriculture and Minerals of Derbyshire vol 1. At Palterton, Shuttlewood-Common, and Stanfrey, coals have been worked in these measures from under yellow lime, and are now so working west of Clowne. Referring to mining coal under limestone strata.
He also notes on page 396 that at Carr in Palterton he observed the slag and remains of old bloomeries and charcoal furnaces. This is the remains of iron smelting and or its processes in an area nearby. So there is much evidence of coal and ironstone mining in the Palterton area on the escarpment side, as at this time (18th century or before).
Coal mined here by two shafts and an adit or drift, SK. 468 685. This may or may not have been excavated by locals during the miners strikes of the 1970's and 1980's.
This colliery or other collieries are not to be confused with the Palterton Air Shaft or Markham number five as below. 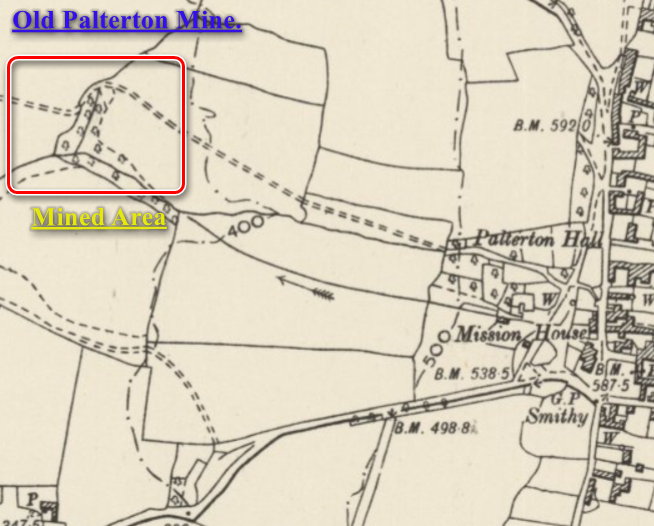 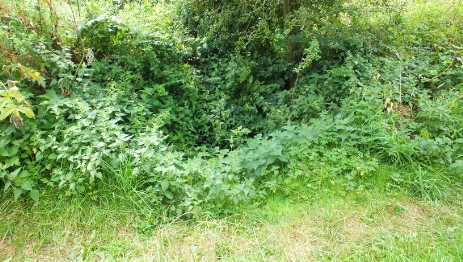 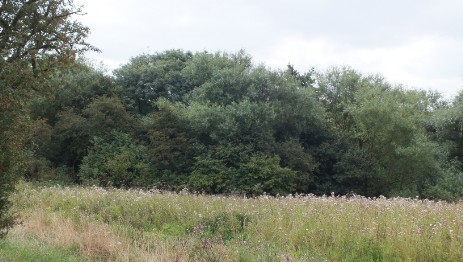 Images above:
Left image shows where the adit coal was mined. SK. 468 685. This may or may not have been excavated by locals during the miners strikes of the 1970's and 1980's.
Right image shows the general appearance of the site. Adit left, shafts right.
Palterton Air Shaft.
Palterton Air Shaft SK 46/56 46006917
(Mackerel Main).
Markham No.3. Ventilation Shaft.
Markham No.5.
This new manriding and ventilation shaft was completed around 1919, although from reports in the Derbyshire Times it appears that work started prior to, and was possibly abandoned at the outbreak or during the First World War.
Sited at Doe Lea Bridge as an improvement to the ventilation system in the Top Hard seam workings at Markham colliery. It would allow for quicker inspections of the workings by the deputies, it would also seem that the coal it was to mine may have been taken by Ramcroft colliery owned by a subsidiary of the Staveley Company who owned and operated Markham colliery. A small amount of coal was removed from the pit bottom area in that seam and the roadways to Markham and Bolsover were linked but the main use of the shaft was to speed up manriding to the workings and improve the depleted air supply to the seam. It was also suggested that an agreement be entered into to pump the water from here to and then up from Bolsover colliery although I suppose it would have been an easy matter to pump out and deposit the mine water into the river Doe Lea nearby.
When the shaft was sunk it came across the following seams.
Seam                           From Surface         Thickness
High Hazels               639 feet.         41 inches.
First Saint Johns        765.                31.
Second Saint Johns.   806.                18.
Top Hards.              1036.                74.
One can only postulate on the fact that the shaft and winder there were referred to as Markham Number Five, were there ever plans to expand Markham Colliery with the building of a rail link and washery plant or was it to become a new separate colliery? Although Ramcroft colliery seems to have taken the coal from this area it was a sister pit owned by a sister company of the Staveley company and there had been some problems in the past between the Staveley company and the Bolsover company over the safety issues in this particular area of the pillar of coal which was protecting the Bolsover colliery workings from the water contained in the workings of the collieries to the west of the river. To add to the speculation that a newer bigger colliery was planned in 1918 the following is from the list of working mines in the area. Palterton Colliery at Palterton owned by the Staveley Coal and Iron Co. Ltd., of Chesterfield employed 821 men underground and 22 on the surface. The manager was W.R. Wilson and the undermanager was J. Otterwell. Later by 1923 it is Markham No1 and Palterton employing 353 men underground and 85 on the surface mining hard and soft coals from the Top Hard seam, by 1938 there appears to be no production at Palterton.
According to the plans of the Great Central Railway in the early twentieth century a branch line (one of several planned) was to be run somewhat parallel to the Doe Lea Branch Line on the Sutton Hall side (Arkwright’s land) to link the Markham Junction (old LDECR to Carr Vale) with Glapwell colliery. This would have the result in putting Markham Five or Palterton Colliery in the middle between the Midland and Great Central Railways. It never got built but a branch was constructed by the Midland Railway to link the Doe Lea Branch to Ramcroft colliery, a cheaper alternative I suppose.
I have met many miners and their families (Now sadly passed)  who remember the shaft being used, one lady told me that her father used to leave his 'Dudley' (water bottle) in the cow trough nearby, overnight to keep the water in it cool for his next shift.
Dates from NCB Records.
Sunk 1910.
Manriding until 1921.
Shaft Capped 1968.
Shaft filled in and area landscaped 1981. 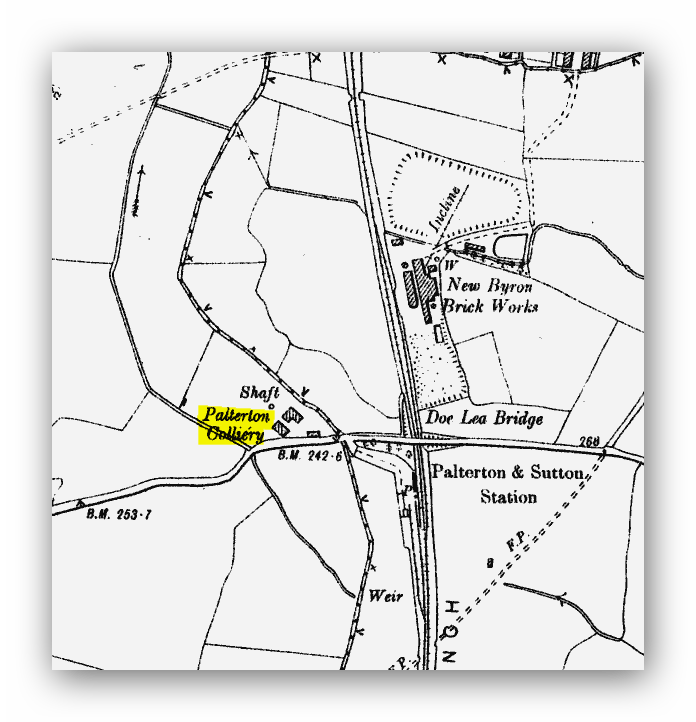 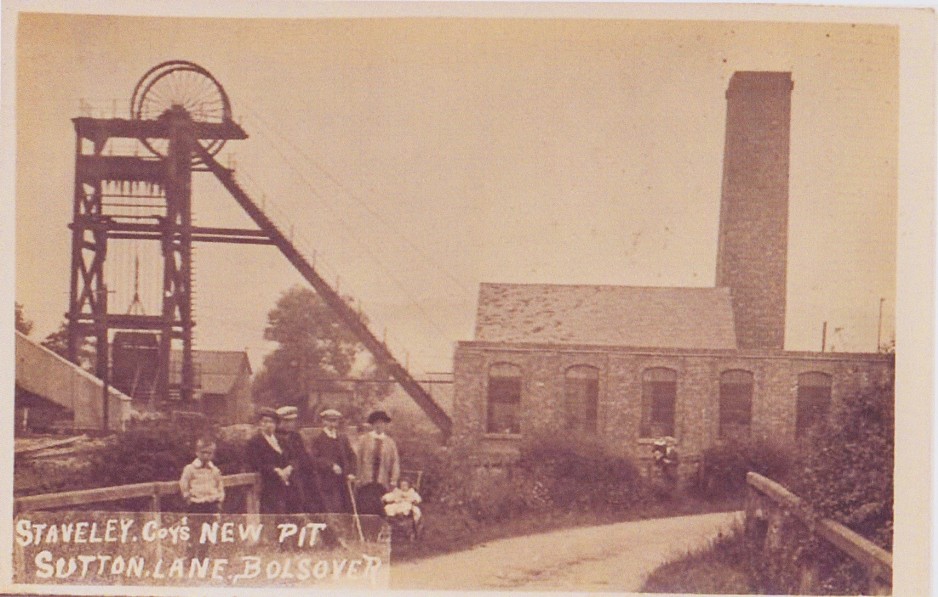 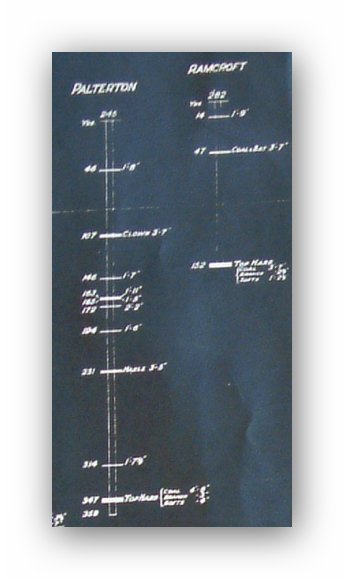